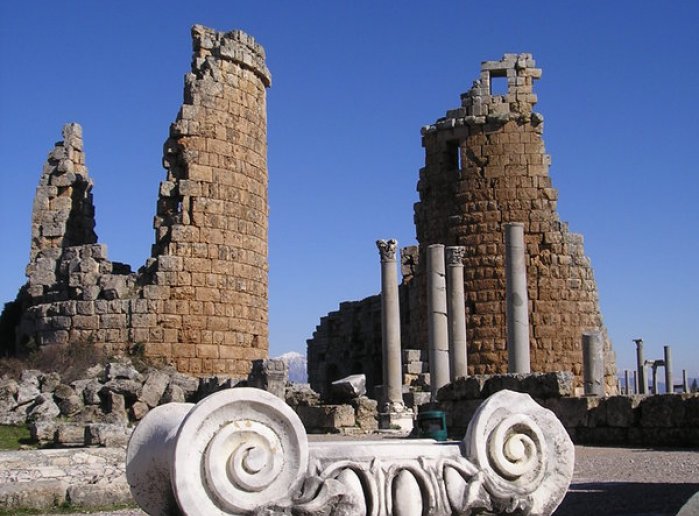 Observe the best-preserved Roman Theatre in the world

Explore an attractive resort town of Side

Go to the magnificent Kursunlu Waterfall

Take an excursion to some of the most important archaeological sights of Anatolia on an 8-hour tour from Antalya. You will visit 3 of the 4 great cities of the Hellenistic period, and cool down at the magnificent Kursunlu Waterfall on one of the tributaries of the lovely Aksu River.

Take an excursion to some of the most important archaeological sights of Anatolia on an 8-hour tour from Antalya. You will visit 3 of the 4 great cities of the Hellenistic period, and cool down at the magnificent Kursunlu Waterfall on one of the tributaries of the lovely Aksu River.

First will explore Perge, an ancient Greek city in Anatolia and the major trade city and capital of Pamphylia, and one of the 4 great cities that also included Aspendos, Side, and Sillion. Today it is a large site of ancient ruins 15km east of Antalya on the coastal plain. Originally settled by the Hittites around 1500 BC, ther site possesses a Roman Bath, Collonnaded Main Street, Agora, Nympaeum, Stadium (capacity 12.000) and Aqueduct.

Perge is famous by the fact that when Saint Paul started his journeys, he visited Perge in 46 A.D. and preached his first sermon here. That's why it became an important city for the Christians during Byzantine period. The first excavations began in 1946 by the Istanbul University, and they resulted in many important discoveries.

Then will continue our trip by visiting Aspendos (the land of the horses), an ancient city in Pamphylia, Asia Minor, located about 40 km east of the modern city of Antalya. It was situated on the Euromedon River about 16 km inland from the Mediterranean Sea. The Aspendos Theatre (built between 161-180 AD during the rein of Marcus Aurelius) has been known for having the world’s most well preserved theatre for nearly 2000 years, therefore is one of the greatest tourist attractions. This structure with an extraordinarily perfect acoustics hosts every year international and local concerts and festivals.

After Aspendos will explore Side (meaning pomegranate) located in the region of Pamphylia in Anatolia and was both a prosperous Aegean trading centre in Hellenistic and Roman times and a base for Cilician pirates in the 1st and 2nd centuries BCE. One of the first things you notice on arrival at the site is that modern Side is a tourist town. However, it is also one of the best preserved classical sites in Turkey.

According to historians, Side was founded in 1405 A.D., had been ruled by the Lydians, Persians, Alexander The Great, Antiogonous and Ptolemaioses respectively, beginning from the second half of 6th century A.D. Side lived its most magnificient days while it was the bishopric center in 5ht and 6th centuries. Side theatre with 20,000 viewers capacity has a historic architectural importance because it was not located on a slope of a hill like other Roman theaters and its structural characteristic was arches over the walls and columns. Side is a site with a long history which has left behind numerous buildings and ruins like a splendid Agora, temples, an aqueduct, nymphaeum and etc.

0
Hi, I'm interested by this tour. Do you pick up tourists from hotel located in Belek ??
Reply Reply with quote
Refresh comments list