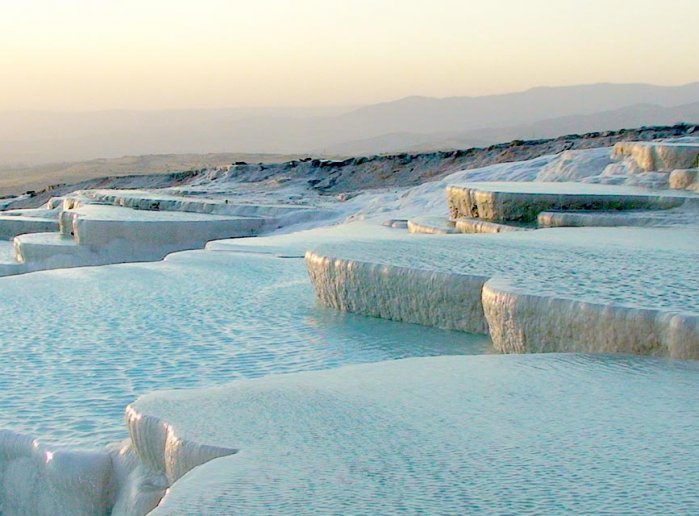 Your full day excursion begins in the early morning when you’re picked up at your Antalya hotel and begin the drive to Pamukkale. After a lunch break you’ll visit the cascading snow-white terraced cliffs of this mysterious Cotton Palace. You’ll will have a chance to swim in thermal pools. An additional option is to swim in Cleopatra’s Pool, for an extra fee.

Deriving from springs in a cliff almost 200 m high overlooking the plain of Curuksu in south-west Turkey, calcite-laden waters have created an unreal landscape, made up of mineral forests, petrified waterfalls and a series of terraced basins given the name of Pamukkale (Cotton Palace).

Located in the province of Denizli, this extraordinary landscape was a focus of interest for visitors to the nearby Hellenistic spa town of Hierapolis, founded by the Attalid kings of Pergamom at the end of the 2nd century B.C. The therapeutic virtues of the waters were exploited at the various thermal installations which included immense hot basins and pools for swimming. Hydrotherapy was accompanied by religious practices, which were developed in relation to local cults.

Ceded to Rome in 133 B.C., Hierapolis flourished, reaching its peak of importance in the 2nd and 3rd centuries A.D., having been destroyed by an earthquake in 60 A.D. and rebuilt. Remains of the Greco-Roman period include Roman baths, Roman Theatre, Apolo Temple, monumental arch, nymphaeum, necropolis and agora.

Hierapolis had a religious importance for Christians and Jews. Introduced with Christianity in a very short time, the city hosted many missioners who visited the area to spread the religion. It was Saint Paul of Tarsus, one of the apostles of Jesus Christ, who enabled Christianity to spread very quickly in Anatolia, in the 1st century A.D. The belivers of this new religion suffered from great tortures and pain until the Christianity became the official region during the reign of Constantine the Great in 324 A.D. The event made the city more important that Saint Philip one of the twelve Apostles of Jesus Christ was killed there in 80 A.D. The group of Christian buildings are the cathedral, baptistry and churches there. The most important monument is the martyrium of St Philip. At the top of a monumental stairway, the octagonal layout of the building is remarkable because of its ingenious spatial organization. The fortress, built on the cliff, testifies to its ultimate historic phase.